Did you know that some areas of "Berkeltal" park belong to the special “Berkelaue flora and fauna nature reserve"?

Until the end of the 1970s, there were extensive wet meadows along the north-western banks of the Berkel near the farms of Wening and Ebbing, which were situated close to the centre of town. Until the end of the 1950s, farmland bordered directly on the northern part of town, today’s Konrad-Adenauer-Strasse and Holtwicker Damm.

When the two farms moved further out in the 1960s and 1970s, large development areas were created to the right and left of the road “Auf dem Brink”. At "Ebbingshof" farm, the low-lying meadow areas near the river bank were transformed into a recreational area. Between Hambrücke and Alfers’ Mill, four large ponds and an extensive network of paths with interspersed seating and recreation areas was created. Later on, a hill for sledging in winter was formed and various playground installations were added.

This attractive park between the river and the built-up areas became a popular recreational area for the public, just like the park in town, which had been created ten years earlier along “Prozessionsweg”. The new park became a figurehead of the town’s urban development at the time.

While Berkeltal Park is still important today, it could do with some face-lifting. Plans are already on the way to redesign it section by section. Today’s focus is increasingly on nature conservation and water protection. Parts of the Berkel floodplain have been officially declared a flora-fauna-habitat under EU directives. Many sections of the river, between its source near Billerbeck and its mouth in Zutphen in the Netherlands, have been protected accordingly.

Hopefully, both the demands of nature conservation and the desire to keep an attractive and nearby recreational area can be united. 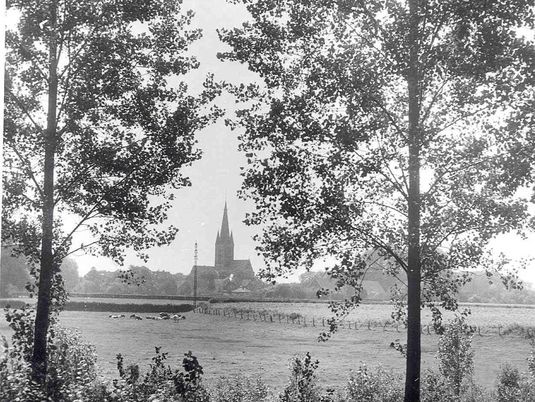 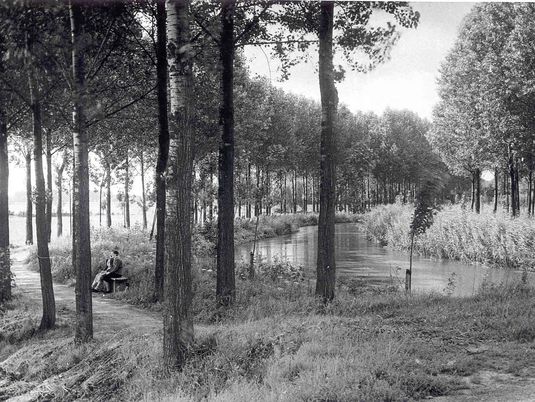 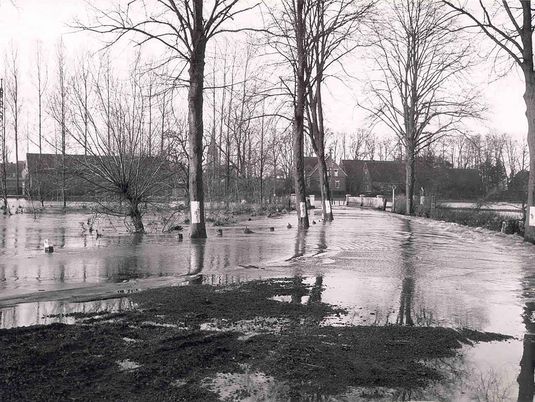 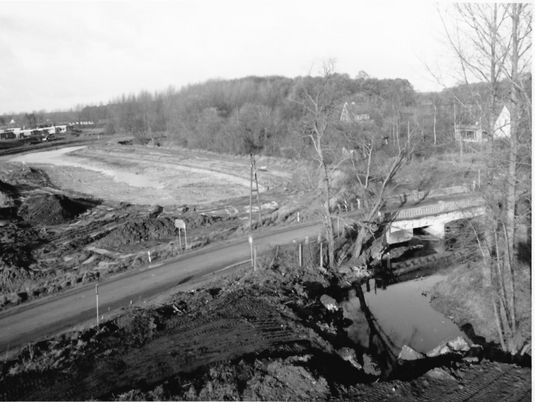 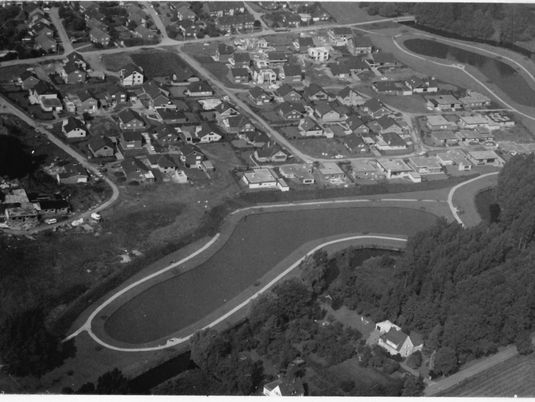 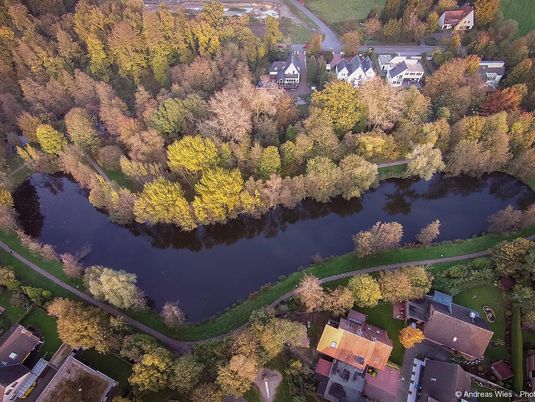 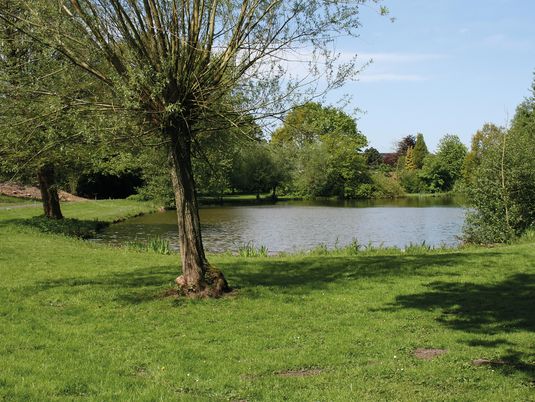 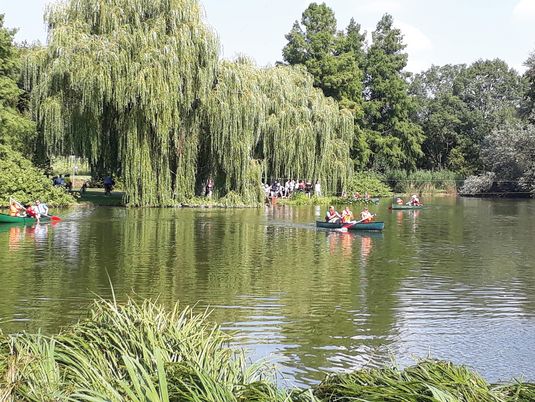 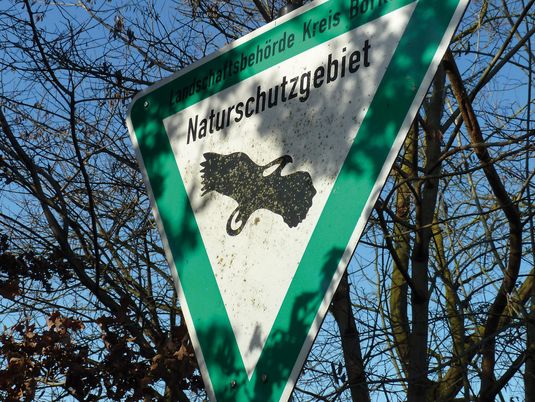 In the early morning of 20 February 1958 a British fighter plane exploded over the western parts of the town centre during a training flight, and wreaked havoc. The ‘Canberra’ jet plane hit the ground north of the Berkel valley where countless pieces of wreckage were scattered about. The explosion was heard as far away as in Coesfeld and Stadtlohn. Both pilots lost their lives.

Fortunately, there were no deaths in Gescher, but a number of people were injured and had to be treated in hospital. The hospitals in Coesfeld and Stadtlohn offered support and helped in the relief operation.

Aircraft debris was found over a distance of almost 1.5 km from the former municipal building (today the Heinrich-Hörnemann-Haus), the Pankratius School, the hospital (today a nursing home) to the Hummelt farm on Ahauser Damm. On the banks of the Berkel river near Priesterwald, the rear of the aircraft fuselage had drilled itself deeply into the ground. The field between the Berkel valley and the farms to the north was littered with parts of the landing gear, remains of the jet engines and the reserve tank.

The enormous blast wave of the explosion and the debris caused large material damage throughout the town centre, especially on Hauptstrasse, Armlandstrase and the areas around St. Pankratius Church. Numerous roofs were damaged. Hardly any window pane had withstood the pressure of the explosion. The historic stained glass windows of St. Pancrasius Church were not spared either and, moreover, many shops and flats were devastated.

The District Craftsmen's Association in Coesfeld soon offered unprecedented support for the inhabitants of Gescher who had been affected by the crash. Professional glaziers and roofers from Coesfeld, Dülmen, Stadtlohn and the surrounding area came to Gescher to help repair the damage in a concerted action and at short notice. The total damage was estimated at 1 million Deutschmarks or 500,000 Euros.

It was a close shave in 1958 and all in all, Gescher was very lucky to have escaped disaster in an event which had great impact on the town’s history. 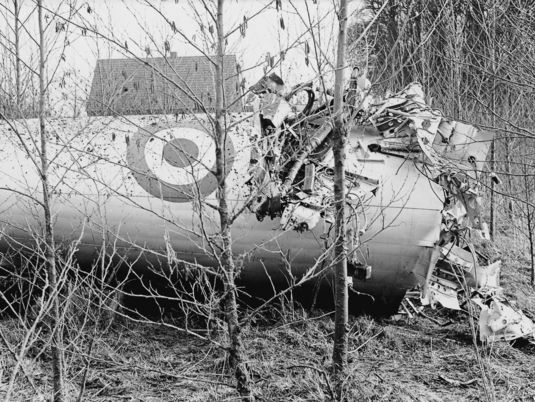 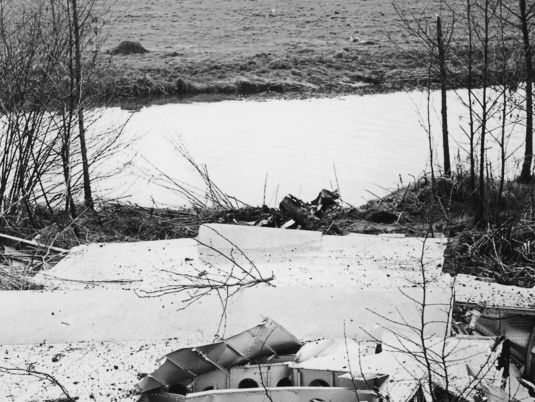 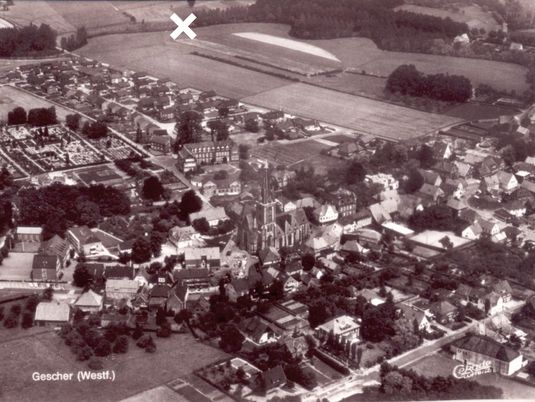 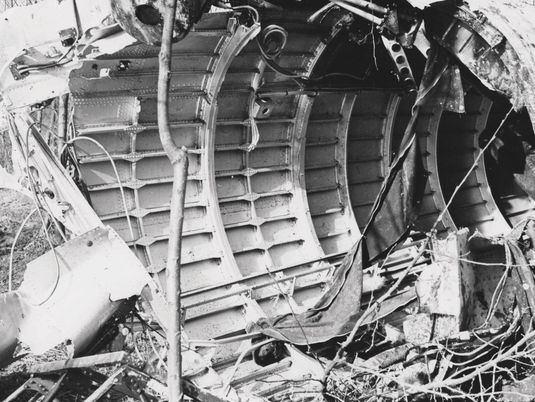 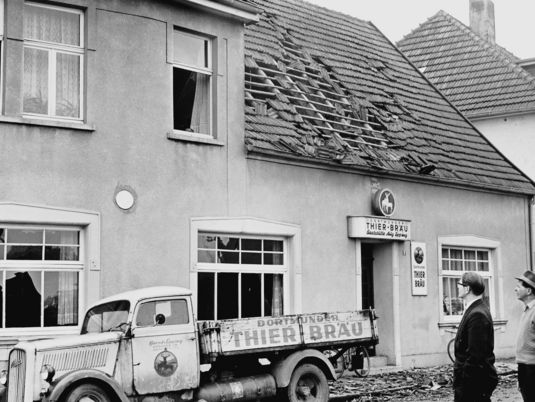 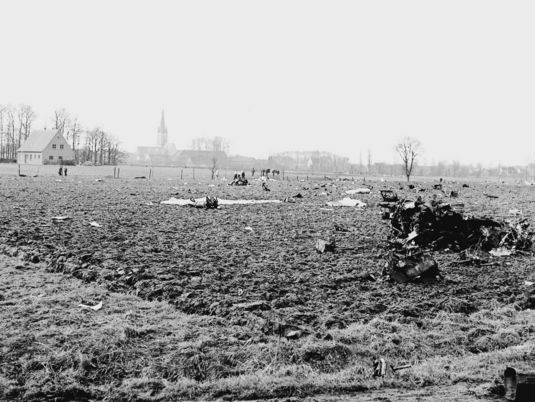 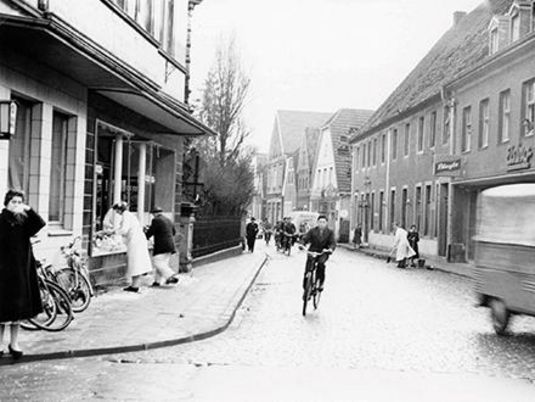 From Berkelstrand to adventure pool

Going for a swim is what everyone wants in hot summer, also in Gescher, but for a long time there was little chance of doing so. At times, swimming in the Berkel river was prohibited by the police and there were only a few areas along the river where swimming and splashing about was possible.

Things changed when the quietly running bend at "Haller Hook" was declared an open-air swimming bath late in the 1920s and corrugated iron changing rooms were set up. In 1935 an official swimming bath was built not far from Alfers’ Mill on the initiative of the local gymnastics and sports club, whose members even collected donations by door-to-door appeals.

The pool water was diverted from the Berkel river and a filter system installed to ensure the quality of water. Historical photographs show, however, that this was not always the case. No surprise that the nickname given to the bath was "the mud pools of Gescher."

Things improved late in the 1950s when fundamental reconstruction and expansion work was carried out. In June 1961, the bath reopened in its new design, which met the latest standards. There were 50-metre swimming lanes and a separate area equipped with three diving boards. A spacious paddling pool and large slide at the edge of the non-swimmer area provided fun for non-swimmers.

In 1994/95 the swimming bath was again fully overhauled and new functional rooms added. The no-frills open-air bath was thus transformed into an adventure bath with two large pools made of stainless steel. The 26°C adventure pool can now be accessed straight from the inside area with its generously glazed centre through a swimming channel.

From May to September, water temperatures are moderate due to the energetic retrofitting carried out. There is also a separate children's pool with various play facilities, spacious sunbathing areas and activity zones.

No wonder that, depending on the weather, up to 75,000 people visit the outdoor bath every summer, energetic swimmers and devoted sunbathers alike. 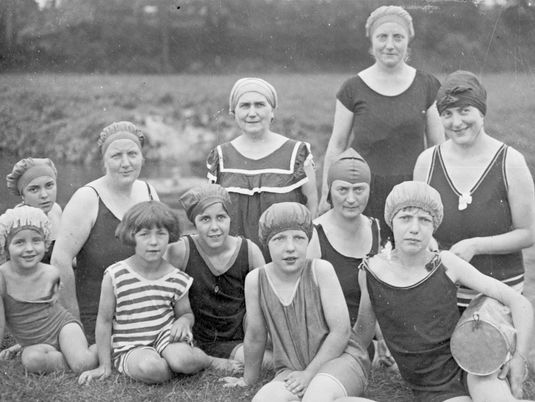 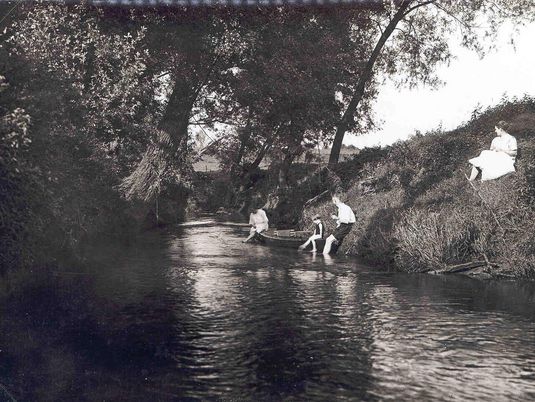 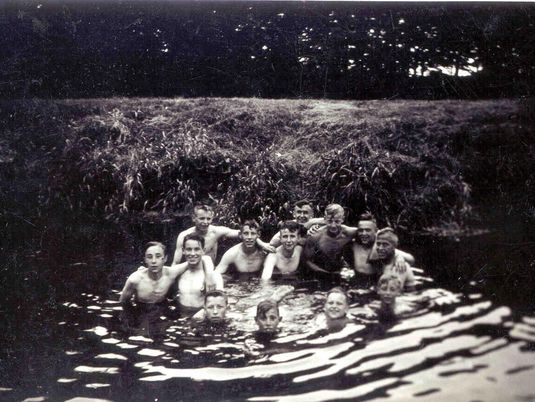 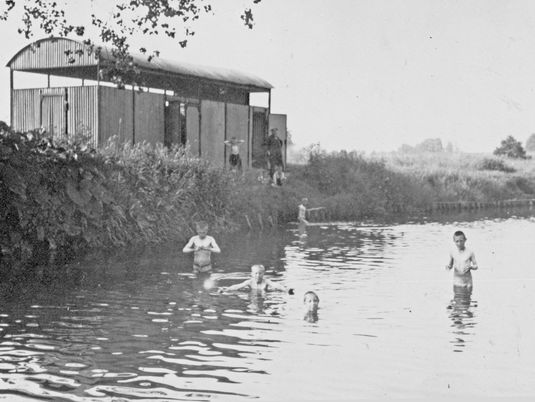 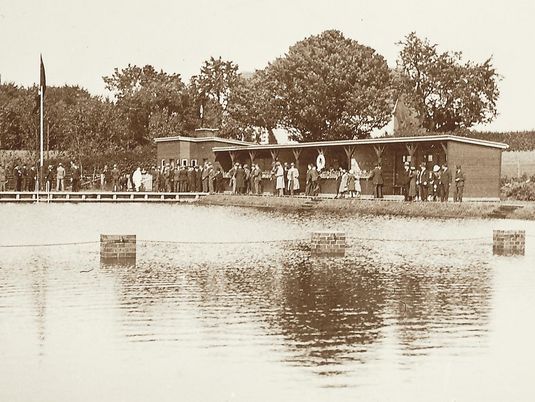 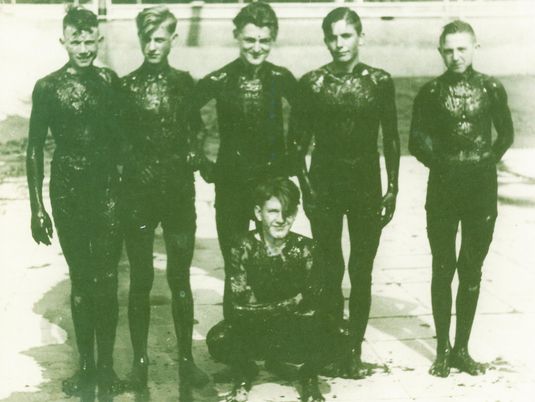 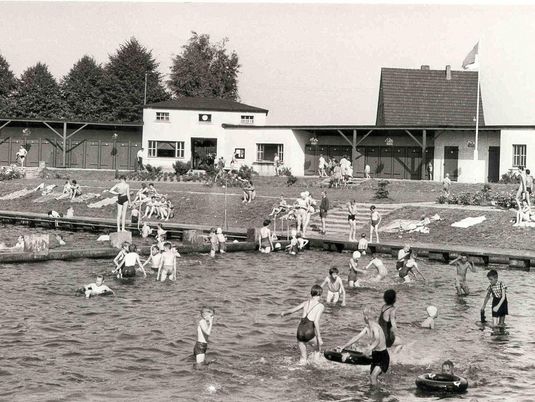 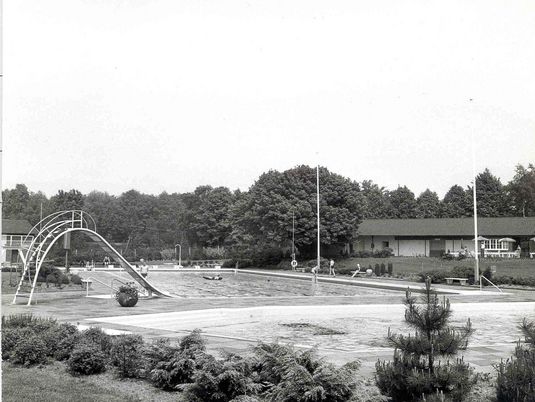 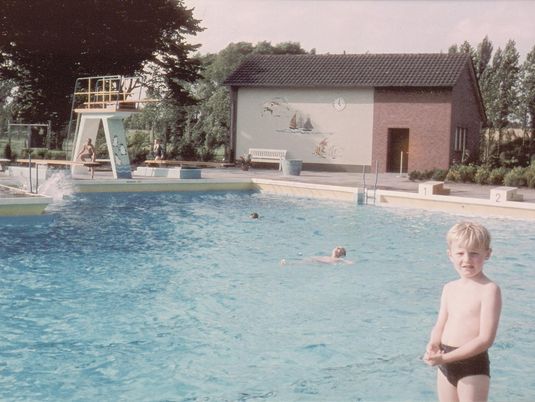 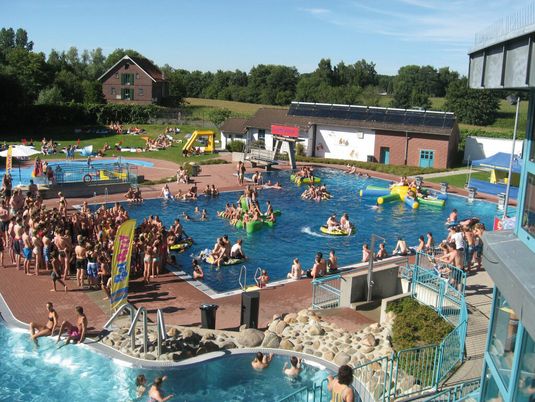